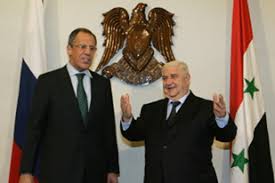 Russia’s foreign ministry on Tuesday said that the Russian Foreign Minister Sergei Lavrov met with his Syrian counterpart Walid al-Moallem in New York to assess the crisis in Syria.

In a statement, the Russian foreign ministry pointed out that Lavrov has reiterated his country’s call for stopping violence in Syria, implementing the announced political, social and economic reforms and organizing national dialogue with the participaton of the opposition.

Following the meeting, al-Moallem said the Russian position provides an incentive to Syria to introduce reforms, according to Russia Today website.

“We move at an intensive rate towards implementing reform. Russia’s position is strong and induces us to act,”  foreign minister Walid Moallem said on Monday. “We expect support from the countries that are on our side. The world is not only the European Union and the United States. “

About The Syrian Revolution 2011 - Lies and the Truth